November 09, 2019
This disease consists of an Involuntary discharge of semen, taking place either during stool, on the emission of urine, sudden movements, or on the least lascivious excitement. 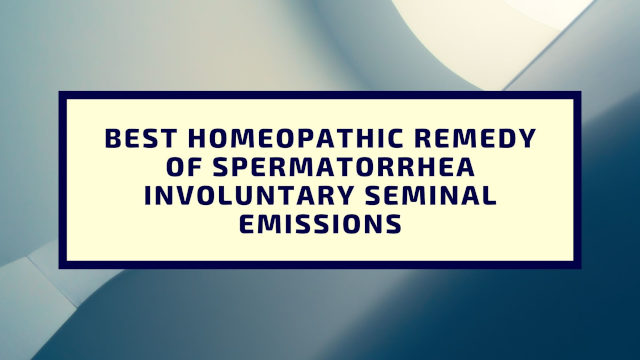 When the semen escapes with the urine during micturition without erection and the patient is unaware of the circumstance and it is by far the most dangerous form of the complaint.

In the daytime, it generally occurs during micturition or a stool, without an erection, and by far the simple mechanical pressure on the organ.

During the emission of urine, the loss of semen takes place only when the last drop is about to be discharged.

These last drops are thicker, viscous, adhere to the orifice of the urethra, and stain the linen.

One of the unavoidable consequences of the disease is impotence; the quality and consistency of the semen become altered and the spermatozoa either dissipate or become so weak that they lose all fecundating power.

Patients suffering from Spermatorrhea become idle, effeminate, and timid. The power of volition is weakened and even destroyed.
They are different, sensitive, capricious, irritable, low-spirited, melancholic, and adverse to any kind of work.

Sleeplessness without apparent cause; impotence, atrophy, and coldness of the genitals; violent erections in the morning; trembling of the whole body during venereal excitement.

It is useful when the disease is accompanied by constipation and heartburn. The acidity of the stomach and flatulence. Distress after eating and distention of the bowels.

It's required when the urine contains stringy mucus with the sensation of burning in passing urine or when blood is also passed. The pollution is very frequent with continual loss of prostatic fluid. It is very efficacious when the memory is very deficient or the head appears confused.

China is very important when the disease has weakened the patient considerably. The least exercise produces great fatigue and he is troubled with a ravenous craving for food.

It can be given when the emission is almost Involuntary without erection or when there is tension and cramp like pain in the genital organs.

Merc. should be given when the tongue is thinly coated, the taste deprived, complexion sallow, with chilliness and great sensitiveness to cold; also there is costiveness, the motions consisting of hard balls or lumps having a dark color.

Phosphorus is of great value when the nervous system seems shattered and the patient complains of oppression and pains in the chest with the tendency to cough.

It's of special value in many cases, particularly when there is great feeling of weakness of the genitals. The semen being lost on the least provocation; for the debility which ensues from the long continuance of the complaint, it is invaluable.

Popular posts from this blog

January 31, 2021
If applied correctly, homeopathic treatment methods can cure a variety of physical and mental health problems. Even those problems are not considered fully treatable in conventional medicine.
Post a Comment
Read more